A very much challenging but satisfactory day

It was a  very much challenging but satisfactory day for us. A woman with previous C section, presented to us at 18 weeks with Quadruple test result. She was in Japan in initial few weeks of pregnancy and then shifted to Kolkata. Thus she missed the opportunity of First Trimester Screening (FTS). The Quad test showed “High Risk for Down Syndrome”. So we offered her Amniocentesis to confirm the diagnosis (putting a needle in the fluid around the baby). Unfortunately this test confirmed the same diagnosis. We gave her options

She opted for termination. As she is 19 weeks, having previous C Section, hypertensive (since before pregnancy, taking medicine) and allergic to usual pain killers, she was told about VERY HIGH RISK and we were scared that she might need opening the abdomen by a large cut to remove the pregnancy. As per legal formalities according to MTP (Abortion Act) of India, we completed all forms, took opinion of a second Gynaecologist.

We gave her medicines but unexpectedly she expelled the baby after only 2 doses of medicines. But the Placenta was retained. She was taken to the OT and the Placenta was removed under general anaesthesia. Although we kept one blood in reserve (as Haemoglobin was 9 G/dl), we did not transfuse it. Now she is stable and we are planning to discharge her tomorrow. 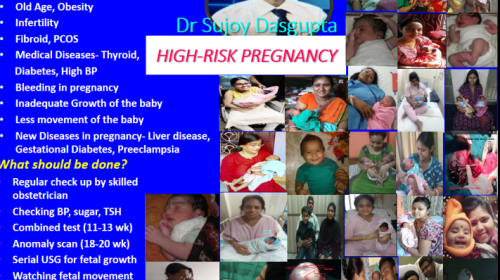 After admission and with the help of expert team of sisters, laboratory staffs, blood bank, junior doctors and radiologists, we managed to arrange URGENTLY for blood arrangement (packed cell, platelets and plasma), blood tests (liver function, kidney function, Haemoglobin, coagulation) and ultrasound. Our team including Anaesthetist and Paediatrician rushed to the spot.

Within one hour, we brought her to the OT and performed EMERGENCY C SECTION. One male and one female baby were born, both healthy, cried at birth and sent to the NICU for observation. However there was around 1 litre of clot in the Placenta signifying that the Placenta separated earlier. This is called ABRUPTION, which is immediately LIFE-THREATENING for mother and baby. But the C section was uncomplicated with minimum bleeding. Patient was stable and sent to the ward.